There is a huge difference between growing older and growing up

Anyone who stops learning is old, whether at twenty or eighty. Anyone who keeps learning stays young. The greatest thing in life is to keep your mind going. 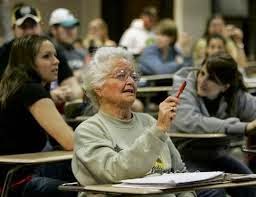 The first day of school our professor introduced himself and challenged us to get to know someone we didn’t already know. I stood up to look around when a gentle hand touched my shoulder. I turned round to find a wrinkled, little old lady beaming up at me with a smile that lit up her entire being.
She said, “Hi handsome. My name is Rose. I’m eighty-seven years old. Can I give you a hug?”I laughed and enthusiastically responded, “Of course you may!” and she gave me a giant squeeze. “Why are you in college at such a young, innocent age?” I asked.She jokingly replied, “I’m here to meet a rich husband, get married, and have a couple of kids…”“No seriously,” I asked. I was curious what may have motivated her to be taking on this challenge at her age.“I always dreamed of having a college education and now I’m getting one!” she told me.After class we walked to the student union building and shared a chocolate milkshake. We became instant friends. Every day for the next three months, we would leave class together and talk nonstop. I was always mesmerized listening to this “time machine” as she shared her wisdom and experience with me.Over the course of the year, Rose became a campus icon and she easily made friends wherever she went. She loved to dress up and she reveled in the attention bestowed upon her from the other students. She was living it up. At the end of the semester we invited Rose to speak at our football banquet. I’ll never forget what she taught us. She was introduced and stepped up to the podium.As she began to deliver her prepared speech, she dropped her three by five cards on the floor. Frustrated and a little embarrassed she leaned into the microphone and simply said, “I’m sorry I’m so jittery. I gave up beer for Lent and this whiskey is killing me! I’ll never get my speech back in order so let me just tell you what I know.”As we laughed she cleared her throat and began, “We do not stop playing because we are old; we grow old because we stop playing. There are only four secrets to staying young, being happy, and achieving success.You have to laugh and find humor every day.You’ve got to have a dream. When you lose your dreams, you die.We have so many people walking around who are dead and don’t even know it!There is a huge difference between growing older and growing up.If you are nineteen years old and lie in bed for one full year and don’t do one productive thing, you will turn twenty years old.If I am eighty-seven years old and stay in bed for a year and never do anything I will turn eighty-eight. Anybody can grow older. That doesn’t take any talent or ability. The idea is to grow up by always finding opportunity in change. Have no regrets.The elderly usually don’t have regrets for what we did, but rather for things we did not do. The only people who fear death are those with regrets.”She concluded her speech by courageously singing “The Rose.”She challenged each of us to study the lyrics and live them out in our daily lives.At the year’s end Rose finished the college degree she had begun all those years ago. One week after graduation Rose died peacefully in her sleep.Over two thousand college students attended her funeral in tribute to the wonderful woman who taught by example that it’s never too late to be all you can possibly be .
**The elderly woman depicted in the original photograph is Nola Ochs, a 99 year old Kansas resident who graduated from Fort Hays State University (FHSU) in 2007 and broke the Guinness World Record for world’s oldest college graduate at age of 95. [SOURCE]

Article posted on http://purple20butterfly10.blogspot.com/2013/05/there-is-huge-difference-between.html where stated they did not know the original writer who posted it on Facebook