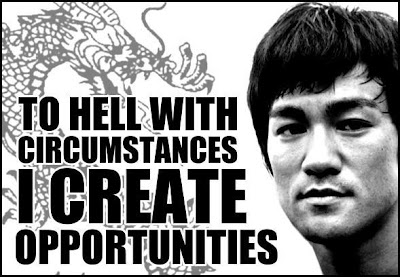 Bruce Lee was indeed a legend in his own time and still a role model for much of the world and the world of the Martial Arts Industry in the U.S., which is one of many opportunities that he can be credited with bringing around to the mainstream.

In today's age, the world is slowly breaking away from traditional media and embracing new change and evolution in entertainment and education and when needed, the evening news. My favorite sources for many things are now on my mobile phone and many mobile phone apps are created in the blink of an eye. 36 billion mobile apps were downloaded in 2012 alone.

Self development in many forms make up a large portion of downloads and only one puts opportunity in the mix. Do searches with different words and look at the reviews and star scores. Many lite versions are worthy to use as well.