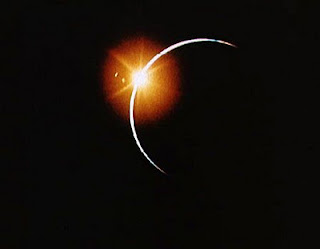 Recently many people around the world were able to witness a lunar eclipse. As it goes, the shadow of earth eclipsed the moon causing the moon to appear dark and reddish in color. This phenomenon is notable as it not scheduled to occur again until 2014. I don’t know too much about astronomy, but this event felt like a metaphor for life to me somehow.
How many times in life do certain circumstances, certain people or certain mindsets cast a shadow over us?  How often do we allow this to darken the “light” that we are created to emit?  How do we live with the understanding that these shadows are merely temporary and that our light must keep on shining in our true purpose and intention?
Several people have experienced huge life transitions recently, or in some cases are seeking a major change. Some though are in a place of personal growth and eagerly learning about the old life traps that had held them hostage and no longer served them, while others were still operating from the same mindset of clinging, blaming, and denial.  The common thread between those who seem to be “shining” amidst the dark shadow that had been cast over their life was the ability to rediscover themselves and to bring their mind, body and spirit into better alignment amidst their tremendous pain and the loss. From a purely observational standpoint, here are the components that appeared to make a difference in the grace and flow of this life transition:
Those who were rediscovering and growing seemed to be the one’s who sought out or resumed physical activities that were meaningful and in alignment to making their body healthy and well.
Nearly all of the people who reported more energy and vitality during this transition, mentioned that they were mindfully eating for nutrition now, instead of eating for escape and comfort.
Many were actively taking the time to grow a practice of meditation, prayer or attendance at religious services or small spiritual groups.
Most were utilizing a coach or a counselor to help them recognize the mindsets and behavior patterns that needed to be addressed and  adjusted and to hold them accountable for change and growth.
Like eclipses that occur and cast their shadow and cause us to stop and observe, life has a way of bringing us shadows that should cause us to stop and observe as well. Behind every shadow, the light shines ever brighter.
If you are in the shadow of life transition be that via a break up, empty nest syndrome, or job change, remember that your light is meant to shine. If you need some assistance with that process, seek out a coach or counselor who can help you discover the traps in thinking and doing that are holding you back from being your best and authentic you.
Traci Vincent www.morningcoach.com
Posted by Chris at 12/15/2011