1. Ancient Yogi’s said there is a feedback system between the mind and the breath. As the breath becomes calmer, so does the mind, and vice versa. In the practice of meditation we concentrate on the breath for a quitter mind and breath.
2.While many meditation methods ask you to concentrate on something outside of yourself, the beauty of Internal fixation technique is that you focus on something inside of you — the breath, air or your belly movement. Since our minds are naturally drawn toward movement, the breath also is a natural focal point for meditation.
3. One can also curl one’s tongue upwards and the tip touches the roof of mouth or connecting the tip of the tongue to the palate in order to stimulate the meridian point and thereby the master glands, the pituitary and pineal. This complete the body internal nervous pathways.
4. Observing Breath, chanting a Mantra aloud or silently all work powerfully together to draw your consciousness toward Spirit. Although it may appear to be a simple technique, its simplicity is its greatness. Normally our mind is our master directing us in many different directions or thought in few different directions. With this process we make our mind as our friend and give it some simple work. It brings peace and harmony. At times our thoughts wonder – do not worry. Just bring them back to watching breath.
5.When used for meditation, Chanting "OM" acts as a natural mantra to control one's breathing pattern, to help achieve deep breath, and to gain concentration. “Om” – chanted as “OOmmm” on exhalation adds extra vibration or power to the sound. It should be a continuous smooth sound without any exertion.
Or one can use any other Mantra you like.
6.Yogis say that on a subtle level the breathing is the very sound that brings in astral energy inside the body.
7. The practice of controlling, the breath brings deep spiritual benefits, one of the most important being a sense of detachment from your physical body and mental processes. Every time you observe the breath without controlling it, you are affirming the peaceful attitude.
8.As we progress in our practice, one can add gazing upward at the point between the eyebrows, or spiritual eye, puts us more in tune with the superconscious. In deep meditation the energy is centered there. Observing the breath helps to calm it. It brings to your whole body system. Please do not expect any new sensations immediately. Practice, practice and Practice is the Mantra. Slowly everything falls in place.\
9.Meditation and Breathing technique when combined together helps discipline one’s mind for greater sense of peace and clarity. One can think more clearly and efficiently, thereby improving one’s life. It also helps relationships and adds spirituality to one’s life.
10.Visualizations, affirmations, and relaxation practices are extremely beneficial.
11.External fixation or visualization can include use of a candle flame or any other figure used for prayers or even nature’s beauty or gentle water waves. I vividly remember when I sat down in a beautiful setting in mountains. I sat down in the garden with a 40 feet Buddha statue located about 100 feet from me. I was sitting in an elevated area surrounded by flower beds. It was a crystal clear day. I felt the touch of divine presence that day during my 90 minutes of silence.
Posted by Chris at 1/21/2021 No comments:

May Every Human Realize We Are One 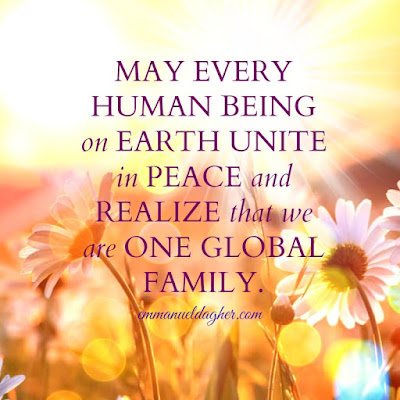 May Every Human Being
On Earth Unite
In Peace And
Realize That We Are
One Global Family.

Email ThisBlogThis!Share to TwitterShare to FacebookShare to Pinterest
Labels: global family, love wins, quote about uniting, unite as one 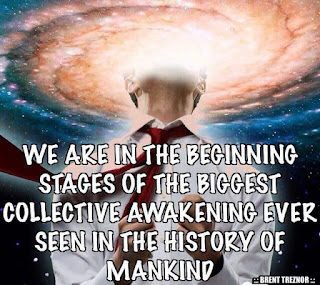 We are in the beginning
stages or the biggest
collective awakening ever
seen in the history of
mankind.
Brent Treznor

"There's something happening here. What it is ain't exactly clear" (but it doesn't need to be). As science gets closer and closer to unraveling the energetic make up of the human body and all else, light particles, instant communication and adaptation from any distance, photons or light particles as communication, photographing auras and other energetic fields all around us. 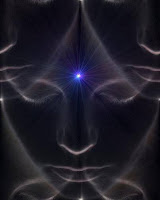 Within each of us is a light, awake,
encoded in the fibers of our existence.
Divine ecstasy is the totality of this
marvelous creation experienced
in the hearts of humanity.
Tony Samara

People are searching the world and the world wide web for worlds of weathered wisdom and information on expanding their spiritual knowledge and abilities.. Meditation is becoming more and more accepted and used in homes, schools, yoga centers and public parks...and in that it helps you to control the thoughts that otherwise control you and gives you that look inside they are always telling you to do.


Many search for Yoga, Native American wisdom and shamanism, Ancient Vedic or Hindu knowledge, psychic and third eye abilities, meditation retreats, guru retreats, healing abilities for themselves or for others and seeking other forms of knowledge and abilities long since lost to our ancestors
or somewhat newly discovered methods such as Theta Healing or the vastly popular Japanese method of Reiki.

To me it signals the next progression for human kind and ascension for all.
That's evolution at it's best! 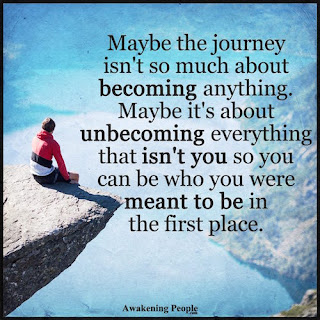 Thousands upon thousands of people worldwide are learning techniques and taking lessons, Reiki online or in person for example, and is a very simple method to learn.  Reiki was culminated and "discovered" by the Japanese Buddhist scholar Mikao Usui who studied ancient Tibetan, Hindu and other forms of healing and through prolonged meditation and fasting, was given the ability and the knowledge of what he had studied came into place. Reiki has never been so popular and even from any distance you may learn and be attuned to it or receive it's help to you heal from whatever ails you....  to channel the universal or qi energy (rei universal ki energy) to yourself or others. I and more and more friends from many countries answer to many requesting Reiki and give it freely through Facebook groups and you may search there to find it for free. The attunement alone to be able to channel, cleanses you and can also open you to you're natural spiritual and psychic abilities such as intuition and more.  With some of  the medical professions Reiki is a considered a complimentary therapy, as in it works alongside and not in place of medical treatments so please see your doctor as needed. It is often used to relieve side effects and symptoms and more from such treatments and can even help you to heal your emotions.

Will you be left behind if you don't seek answers now or do this or that? I don't believe so and Lightworkers as we are called, may be nudging the domino to tip, but I see everyone being as one with everyone else and smiling ear to ear at the same moment in time when it happens,
:)
Love and Light to All and All to Your Highest Good
Chris Crabtree
Posted by Chris at 10/16/2016 No comments: 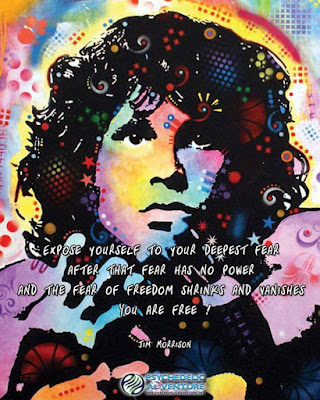 Expose your deepest fear.
After that, fear has no power
and fear of freedom shrinks and vanishes.
You Are Free !

Meditation Is Not Evasion

Meditation is not evasion.
It is a serene encounter with reality.
by Thich Nhat Hanh

Meditation is a practice where an individual trains the mind or induces a mode of consciousness, either to realize some benefit or for the mind to simply acknowledge its content without becoming identified with that content. Meditation can also be an end in itself for those who seek to distress themselves and live a peaceful life of balance and harmony. Why you chose to meditate is up to you but since its benefits are manifold it is suggested worldwide and by anyone who has even tried it once. Change your life today, by simply meditating for 10 minutes every day. Do nothing, just sit in silence and lose all thoughts....love n light

by Shallu Arora and posted in Reiki - A Path to Health on Facebook
Posted by Chris at 7/05/2016 No comments:

Courage Is In Your Heart 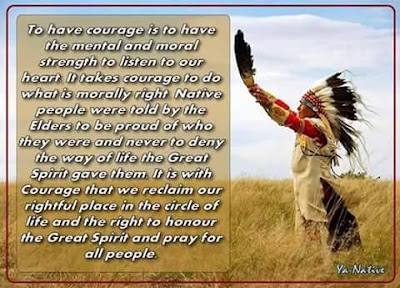 To have courage is to have the mental and moral strength to listen to our heart.
It takes courage to do what is morally right.
Native people were told by the Elders to be proud of who they were
and never to deny the way of life the Great Spirit gave them.
It is with courage that we reclaim our rightful place in the circle of life
and the right to honor the Great Spirit and pray for all people.
Ya-Native

The Goal Of Meditation 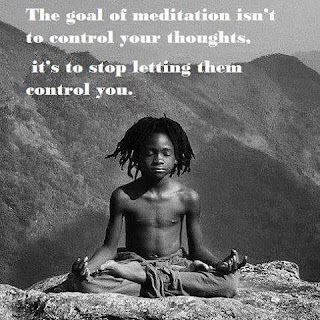 The Goal of meditation isn't to control your thoughts,
it's to stop them from controlling you.

Email ThisBlogThis!Share to TwitterShare to FacebookShare to Pinterest
Labels: boy in meditation, control thoughts, goal of meditation, meditate, meditation, mindfulness, what does meditation do, why meditate
Older Posts Home
Subscribe to: Posts (Atom)